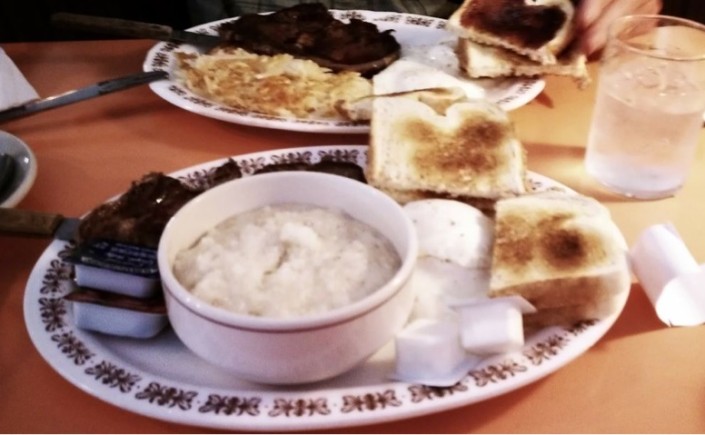 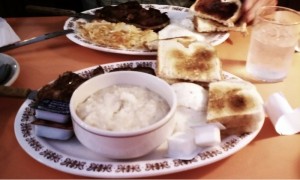 Dave and I have had quite a few dinners over the years at Jack’s, especially when brother Rob and sister-in-law Deb would visit. Rob loves this place, and that may be an understatement. For dinner, this is your basic, local steakhouse. Nothing fancy here, and even Rob will admit that it was better when the actual Jack owned the place. In my opinion, it has really improved since indoor smoking in restaurants was banned. I am usually not that sensitive to smoke, but this restaurant was just a haze of smoke, even the nonsmoking section. Really ruined my appetite which is hard to do. But those smokey days are long gone.

Anyway, Rob and Deb like to have breakfast at Jack’s when they are in the Hills. Since we needed to be out and about this morning, we decided to have breakfast there. In the daytime, the restaurant is a much cheerier place than at dinner time. There was a good size crowd, a mix of locals and a couple of vacationing families. Service was just a little slow, but friendly and attentive once it started. Dave and I both had steak and eggs, but while he had hash browns, I had grits. Our “breakfast steaks” were thin, but quite good. The over easy eggs were the best I’ve ever had. Perfectly runny yolk, white cooked through but not browned or lacy. We both ordered the excellent sourdough toast, but could have had white, wheat or rye.

So after all these years I have to admit my big brother is right: Jack’s Steakhouse is a great place to have breakfast in the Hocking Hills.