Thanks to our hard working staff and mother nature, many trails in the Hocking Hills region have reopened! Those include the trails at Conkle’s Hollow State Nature Preserve as well as Cedar Falls, Rock House, and Ash Cave in Hocking Hills State Park.
The only trails/areas remaining closed at this time are:
• Cantwell Cliffs (all areas closed)
• Old Man’s Cave (trails to the cave and along the gorge from Upper Falls to Cedar Falls remain closed)
• Whispering Cave (part of Old Man’s Cave)
• The Rim Trail from Cedar Falls to Rose Lake
• The fisherman’s parking lot will also remain closed
If you intend to hike in the region, we urge CAUTION as some trails may still be slippery and Yaxtrax or ice spikes are STRONGLY recommended. Stay safe!
The scenery will be stunning, but please be careful out there!
Mary at Marsh Hollow 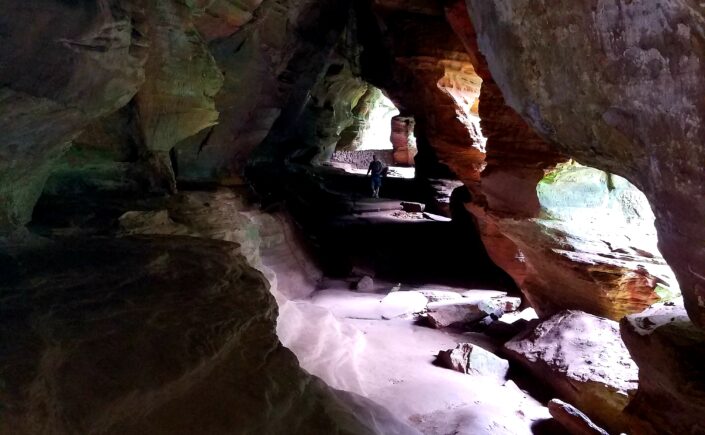 The Hocking Hills State Park & Forest hiking trails are currently closed. However, the Ohio Department of Natural Resources recently issued a press release announcing that Rock House and Cantwell Cliffs will re-open on June 15. This week, ODNR announced that  their goal is to open Old Man’s Cave, Cedar Falls, Ash Cave and connecting trails by July 2. Trails are being reconfigured for one-way hiking to help achieve social distancing in our very popular park.

Our advice for avoiding crowds while you are hiking:

As you can imagine, we are very excited about the Park re-opening!

Happy trails to you, 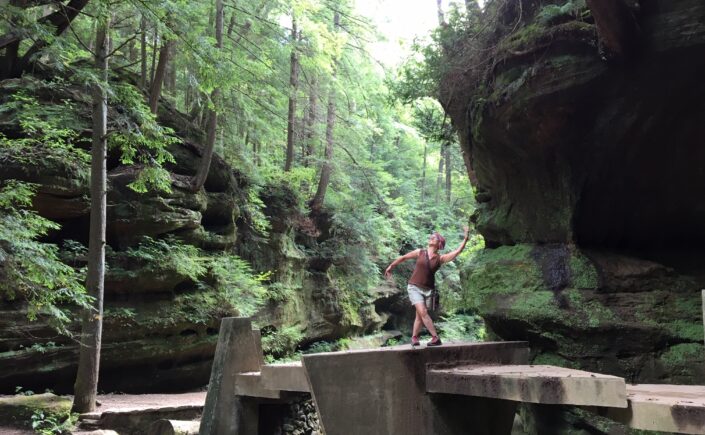 Last week, we hosted family at Marsh Hollow. We decided to play tourist and pretend we were visiting too. I think our itinerary turned out to be a pretty good plan for a day trip to the Hocking Hills, or for just one of your vacation days if you’re staying in the Hills. We left the house at 10 am and returned home just after 4 pm to give you an idea about how long our tour lasted. Note: click on photos for larger views but only if you have a good Internet connection. 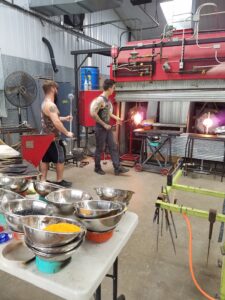 Our first stop was Jack Pine Studio on Route 180, about 10 minutes from Marsh Hollow.  Jack Pine is an artist who creates blown glass masterpieces. We were amazed as soon as we stepped into the showroom, where many of Pine’s beautiful art pieces are on display and for sale, along with work of other glass artists and craftsmen. The Studio’s other glass artists also create affordable blown glass pieces, with a heavy emphasis on pumpkins. A very cool (or hot!) feature of this studio, is that they are making glass pieces every day and visitors can watch art being created. Practicalities: they have a single indoor restroom, very clean. 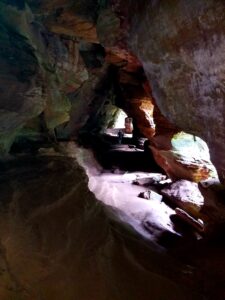 Inside Rock House with flash camera

Our next stop was Rock House, the only true cave in the Hocking Hills. There was dispute in our group about whether or not it is truly a cave since there’s so much light in it. Here’s the definition of cave from Wikipedia, which I think supports the “cave” designation:

A cave or cavern is a natural void in the ground, specifically a space large enough for a human to enter. Caves often form by the weathering of rock and often extend deep underground. The word cave can also refer to much smaller openings such as sea caves, rock shelters, and grottos, though strictly speaking a cave is exogene, meaning it is deeper than its opening is wide, and a rock shelter is endogene. 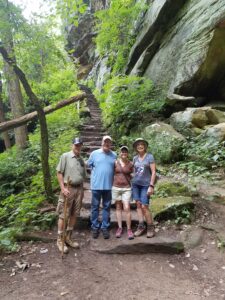 At the steps up to Rock House

Rock House trail is all downhill to get to the cave area, then hikers must climb up some old rock steps to get to the cave entrance. It is dark inside. Have your phone flashlight ready for the dark spots. After exploring the cave you will continue on the trail up and out of the gorge. It’s not as steep or long as the downhill.  Practicalities: We’ve taken small children and dogs to Rock House in the past, but it is definitely less stressful with an all adult group. Also, you will be glad you used the restroom at Jack Pine when you walk past the one at Rock House.

Our next stop was supposed to be the gorge trail at Conkles Hollow State Nature Preserve on Big Pine Rd., about 11 minutes from Jack Pine Studio. As we turned onto Big Pine from Route 374, we saw that the road was closed. A worker told us a bridge had just been torn out and advised us of a long detour. We decided to skip this short gorge trail and head out to our next stop, which was lunch at….

Grandma Fayes Grocery and Deli is a Hocking Hills institution and only 5 minutes from Conkles Hollow. Their motto is “if you forgot it, we probably have it.” Our lunch was delicious! Among the five of us we enjoyed: haddock sandwich, deep fried mac ‘n cheese bites, deep fried mushrooms, french fries, pizza sub, tuna sandwich, and turkey swiss cheese sandwich. Our only criticism was that the buns/bread were just so-so. Practicalities: this was a heavier lunch than most of us needed. I think we all could have napped. Pack a lunch, but stop here for the mac ‘n cheese bites to share. Also save your restroom needs for the next stop. 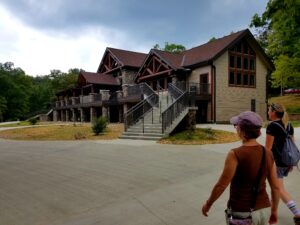 It took us about 5 minutes to drive to the brand new Hocking Hills Visitor Center at Old Man’s Cave.  There are very informative exhibits about the region’s history, development and natural resources, plus great trail information. There’s a small cave for the little ones to explore, detailed information about the trail system, seating and convenient access to the Old Man’s Cave trail system. A small gift shop with Hocking Hills themed merchandise is also on site. Practicalities: The water bottle filling stations are just what every hiker needs. The restrooms are large and clean. 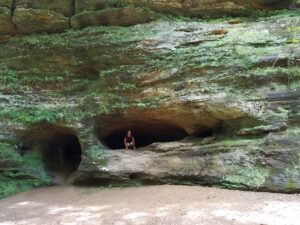 Several entrances to the Old Man’s Cave trail system are steps away from the Visitor Center. We hiked down into the gorge, where I got completely disoriented because it wasn’t my usual way into this site. However, others got me righted and we headed to the Devil’s Bathtub, which did not have much water in it. We then hiked along a nearly people-less trail, across the awesome bridge pictured at the top of this post with my dancer cousin posing on it, to Old Man’s Cave. We thought about hiking to the lower falls’ basin, but the thought of hiking UP the steps, then down, then back UP again, wore us out. So we ended up exiting the gorge near the Naturalist’s Cabin, then back to the car. There is so much more to do at Old Man’s Cave, but we had one more stop on our tour and needed to get home by 4 pm. 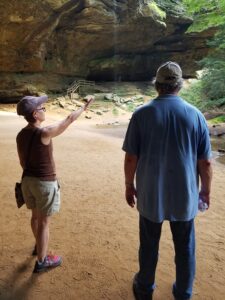 Ash Cave was our final destination, about 10 minutes by car from Old Man’s Cave or a six mile hike along the gorge trail, plus six miles back to your car. We wanted to leave on a positive note. The Ash Cave trail is very short and completely flat (wheelchair accessible). It’s a paved trail until you reach the actual rock shelter. There was very little water in the falls, but the spectacularly high rock shelter impresses even without water. Practicalities: This is a great destination if you’re touring with little kids.

It took about 20 minutes to return to Marsh Hollow. Some took the opportunity for a nice soak in the hot tub. Others started to gather ingredients for dinner. At least one checked into work online. One sat in a rocker on the front porch and just enjoyed this little slice of heaven we call home.

Last practicalities: To avoid crowds, visit the Hocking Hills during the week. Our tour occured after the start of school so that helped too. If you must visit during busier times, go early or late to the various sites. Take a long break in the middle of the day. And visit during off season, generally November through mid-March. Our lodging rates go down, along with the crowds.

Our advice: take a flashlight on this hike. It is incredibly dark. We hiked it two years ago, and had to shuffle along holding hands. While there are luminarias along the trail, it’s just not quite enough light once it gets really dark. However, it’s great to catch glimpses of the bonfire as you get closer. The hike can be started any time, 5 to 7 pm today, December 11. For more info, click the link in the title or go to http://www.thehockinghills.org/Park_Event_Holiday_In_The_Park.htm